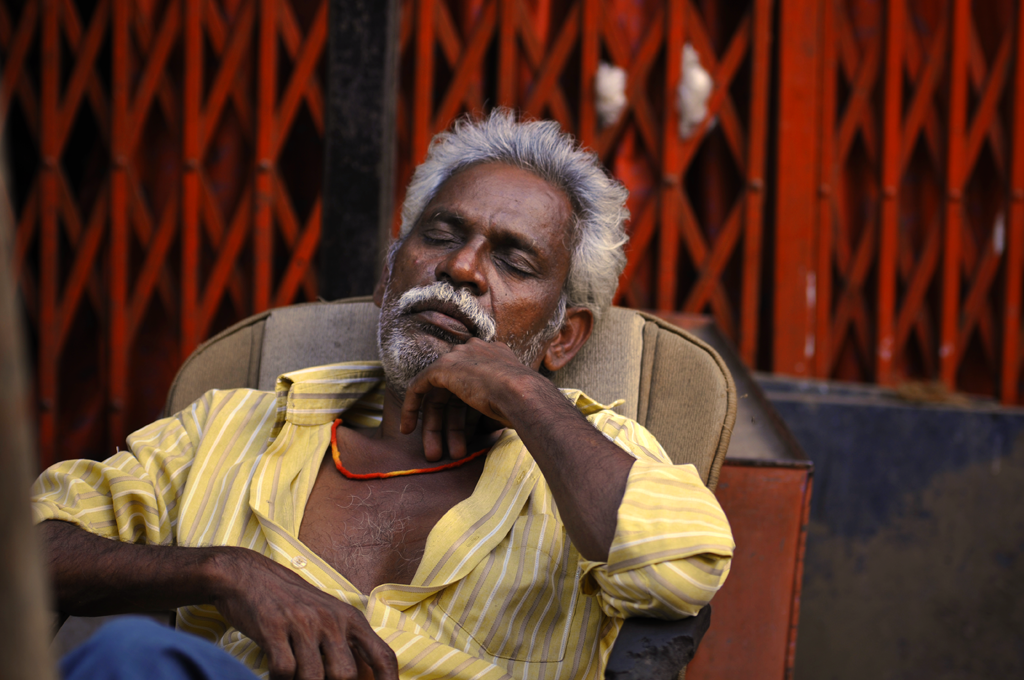 Photo of a man in Mumbai, Maharashtra, India. One of the many photos by the photographer.

Mumbai is a mind-bending assault on all your senses, Kristian Bertel photographed an overwhelming melting pot of neighborhoods, religions, customs, and culinary traditions in India's most populated city - A city said to have over 25 million people.

Picturing the largest slum in Asia
Mumbai is housing Asia's largest slum named Dharavi, where the photographer got and eye-opening glimpse into what Mumbai life is like for nearly a million people and he portrayed the lives of real people as they work and strive to make a living. Dharavi is one of the most under reported areas of development in the country. In Mumbai, a sizeable chunk of the clothing and recycling industry has its workforce in the slums of Dharavi, located in central Mumbai. It is a bustling mini-city in itself, with more than $500 million in annual turnover. It has one of the largest industrial bases for handling leather goods, pottery and clothing which are supplied all over India. Even worldwide.

The walk through the alleys of Dharavi, passing workshops recycling everything from aluminum to plastic cooking oil bottles, diving down some alleys which were so narrow daylight never penetrates, was a fascinating encounter with another world.

Mumbai - The city of dreams and lost hopes
Mumbai is indeed, the 'city of dreams' as it is affectionately dubbed, is a city of sharp contrasts: business tycoons drive past scantily clad street urchins, swanky bars overlook rickety chai stalls, and women wrapped in chiffon saris shop alongside college girls flaunting the latest western designer wear. Yes, if there's a city that stirs the soul and fires the imagination like no other, it's Mumbai. "- I have a keen interest in photographing people. Because all people look different, especially in Mumbai, where the contrasts are so different, the portraits of people will probably be my most interesting subjects also in the years to come. I choose my subjects based on many things, for example if they are dressed in traditional clothing or if a subject has a great expression or is standing in a great scenery", the photographer says. 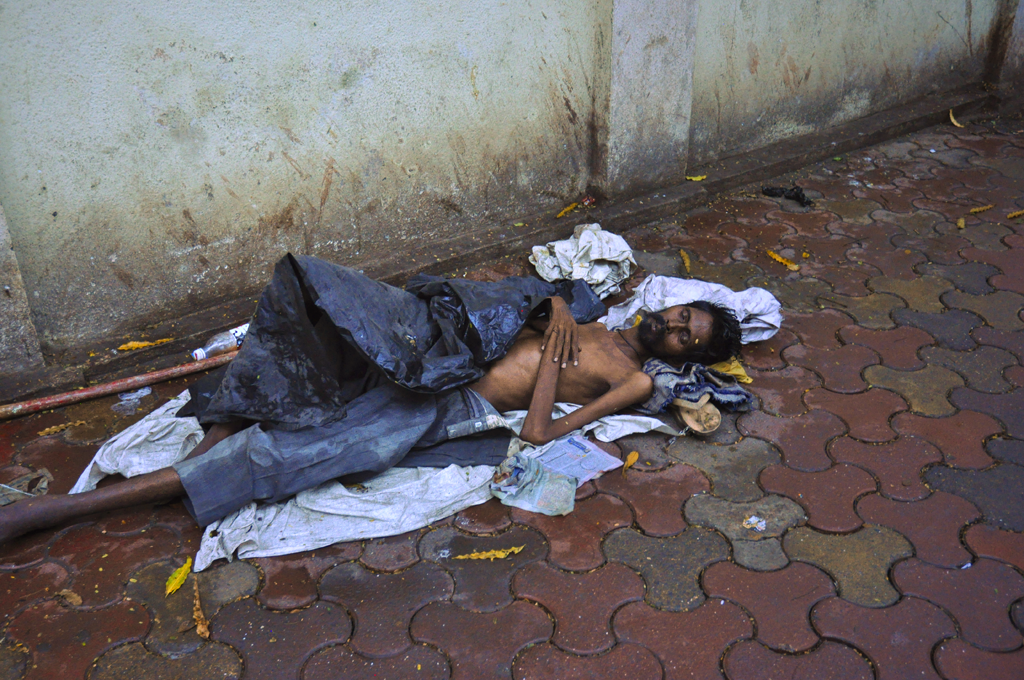 Man sleeping on the pavement near the Crawford Market in Mumbai, India. The number of poor people in India amounts to more than 300 million.

Confronting poverty in Mumbai, India
Since arriving in India the first time back in 2008, he has been drawn to India. A country where he experienced a side of human existence, that he had never seen somewhere else. A country of the unknown, the India that nothing can quite prepare you for because of its very essence touched the photographer. "- I literally saw people sleeping on the ground, and one of the moments I remember the most was a very thin Indian man wrapped in a plastic bag. He used the plastic bag as a cover to keep himself warm on the pavement", the photographer says. 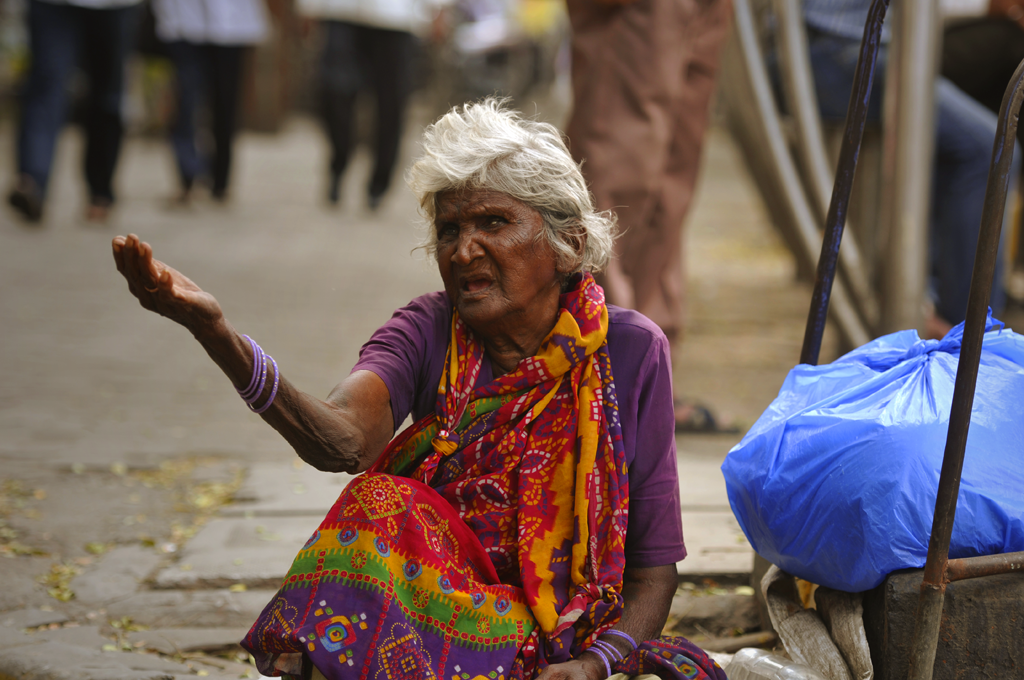 Photo of a woman begging in Mumbai, Maharashtra, India.

Pictures and stories from India by Kristian Bertel
With stories and highly descriptive texts Kristian Bertel is displaying photos from his journeys to India.
"- Street photography is fascinating. It is not about the camera, the lens or that perfect view. It is about the moment which makes me squirm, or smile or perhaps a situation that moves me so much that I just have to capture it with my camera. I think every photograph is somekind of an allegory. As soon we have grasped the contents of an image our minds start to envisage a life before and after this decisive moment. Portraiture is especially responsive to the imaginary narratives we may weave around a picture. Each face is unique - we have never seen it before and we will never see it again. It is this newness of a portrait that compels us to construct stories. Yet, in doing so we often reach for the familiar."

Photos that portray life
Kristian Bertel is a humanitarian and photographer, always on the look out for portraits that tell a story.
"- I'm drawn to these enormous cities, that never end nomatter how far you go, and to be able to see all the aspects in a city of millions", he says. His photographs have been shown online as photo essays - documenting many aspects of the daily life particularly in India. He works as a photographer and he is available for editorial assignments all over Europe, Asia, Africa and in the Middle East. For further information and inquiries please:
Contact the photographer